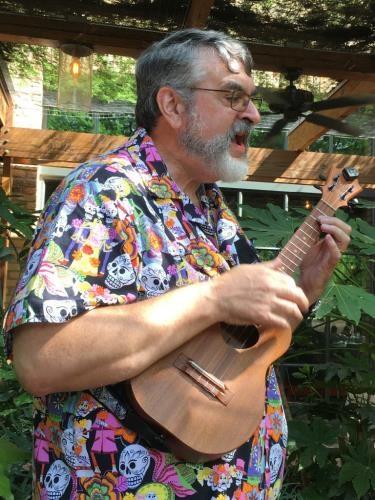 The Tuesday Ukes Group and this website are dedicated to the memory of Kevin Jay Jolly. Kevin was the group’s founder, leader, and teacher. He passed away on June 14, 2020 from a heart attack, and is survived by his wife Karen and son Don.

Among his passions were Texas archaeology and the Ural motorcycle, but most of us knew him for his love both of the ukulele, and of sharing ukuleles with others. As a member of the Austin Ukulele Society, Kevin decided that meeting once a month was just not enough. He, along with some friends, felt that it would be better to meet weekly and thus the Tuesday Ukes Group (TUG for short) was formed.

Over the past few years, 12 to 18 people would gather at the Hancock Recreation Center to share songs and learn new ones. Kevin also contacted senior activity centers in the hopes of recruiting more ukulele players in Austin. During these sessions, Kevin and TUG members would drop by with his loaner ukuleles to share songs and to get people playing. The group also visited senior care homes to offer the residents chances to sing familiar country and Tin Pan Alley songs. Kevin’s ukulele sessions and lessons were always free of charge to everyone.

We miss Kevin terribly, and his friends and TUG members have decided to do their best to keep the group going.